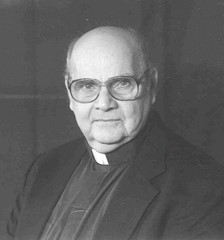 Please share a memory of Thomas to include in a keepsake book for family and friends.
View Tribute Book
Thomas Joseph Gorman was born on October 20, 1930, in West Lynn, Massachusetts. He was the eighth of the nine children of Daniel Patrick Gorman, a machinist, and Alma Olsen Gorman, a homemaker. His parents were both from New Brunswick in Canada. Upon graduating from high school, he entered the Jesuit novitiate in Massachusetts for a short time. After a few months he realized that it was not what he was seeking. After serving as a hospital orderly for a year, in 1950 he joined the US Navy where he found himself in Korea and Japan. He was honorably discharged in 1954 and continued to feel a call to religious life. Eventually, he found his way to the Brothers of Holy Cross after working for a couple of years as an account clerk at a local bank. Tom was received into the Congregation at St. Joseph Novitiate in Valatie in June of 1958, and made his first profession of vows on August 23, 1959 and his perpetual profession on August 23, 1962. He served at Bishop Hendricken High School in Warwick, Rhode Island (1960-1962); at Holy Cross High School in Flushing, New York (1962-1963); at Notre Dame High School in West Haven, Connecticut (1963-1970); at Bethlehem Catholic High School in Bethlehem, Pennsylvania (1970-1971); and at Pius XII School in Chester, New York (1971-1973). He then spent the remainder of his ministerial career in Connecticut: from 1973-1987 at Holy Cross High School in Waterbury, and from 1987 to 2014 at Notre Dame High School in West Haven, working in the Business Office and later as a Library Assistant. He returned to St. Joseph Center in Valatie, NY, for his retirement years, and passed away peacefully on March 2, 2021. The same warm welcome he extended to so many people over the years was surely extended to him as he entered the presence of the God he sought to serve in his youth, and whom he served for more than 60 years as a Holy Cross Brother. His funeral and burial will be private in keeping with the current covid prevention measures in place. May he rest peacefully in the loving embrace of God! .

Look inside to read what others have shared
Family and friends are coming together online to create a special keepsake. Every memory left on the online obituary will be automatically included in this book.
View Tribute Book
Share Your Memory of
Thomas
Upload Your Memory View All Memories
Be the first to upload a memory!
Share A Memory
Send Flowers