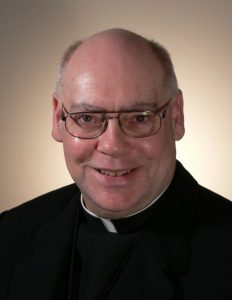 Please share a memory of Robert to include in a keepsake book for family and friends.
View Tribute Book
VALATIE, N.Y. – Rev. Robert E. DeLeon, C.S.C., 72, died at Albany Medical Center, Albany, N.Y., on Friday, February 26, 2021 after an extended illness. He was born on April 6, 1948 in Guilderland, N.Y., to Robert E. and Ann Jacqueline (Mabeus) DeLeon. He graduated from the Vincentian Institute, which was associated with St. Vincent de Paul Parish in Albany. The Holy Cross brothers administered and staffed that school from 1935 until it closed. The Holy Cross brothers were instrumental in helping him to discern a call to the religious life. He was received into the novitiate on August 22, 1966, and made his First Profession on January 26, 1968. He made his Final Profession on August 18, 1973 as a Holy Cross brother. In 1971, he was assigned to teach English and Theology at Cardinal Mooney High School in Rochester, N.Y. He continued this ministry until 1978, when he was assigned as Director of Campus Ministry for Bishop McNamara High School in Forestville, Md. During the next three summers, and then fulltime for two years, he earned credits in Clinical Pastoral Education. In 1983 he was assigned as Staff Chaplain for St. Joseph Medical Center, South Bend, Ind. It was during this time that he was ordained to the priesthood (on June 15, 1985), after earning his Master of Divinity from the University of Notre Dame (Notre Dame, Ind.). In 1987 Fr. Bob was assigned as Director of Pastoral Care for Samaritan Hospital in Troy, N.Y. In 1990 he became Director of Pastoral Care for St. Vincent's Medical Center in Bridgeport, Conn., serving there until 2000. In 2001 he became Chaplain for the Holy Cross Brothers at St. Joseph Center (Valatie, N.Y.) where he has served ever since. He felt completely at home serving with and for the Brothers of Holy Cross, many of whom he knew for just about his whole life. During much of this time (2002 to 2019) he served as Chaplain for the Albany Medical Center (Albany, N.Y.). In his final days, they cared for Fr. Bob after so many years of his care for them. Fr. Bob was preceded in death by his parents. He is survived by his siblings: Kathleen (Paul) Degener, Thomas (Fran) DeLeon, Richard (Susan Faith) DeLeon, Diane DeLeon, and Laurene Walsh. Fr. Bob is also survived by numerous nieces and nephews, and grand nieces and nephews. There will be a closed funeral liturgy at St. Joseph Center in Valatie, N.Y. in keeping with current safety guidelines. Burial will follow in St. Joseph of Holy Cross cemetery on the grounds. A public liturgy will be held once that is possible for Fr. Bob and all those who have died during the pandemic. Raymond E. Bond Funeral Home of Valatie is in charge of the arrangements. Memorial contributions in support of the mission and ministries of the Congregation of Holy Cross can be made to: United States Province of Priests and Brothers, Office of Development, 500 Washington Street, North Easton, MA 02356-1299 or online at https://donate.holycrossusa.org
Online Memory & Photo Sharing Event
Online Event
About this Event