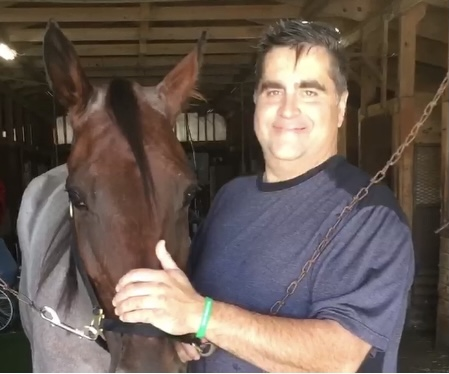 Please share a memory of Darren to include in a keepsake book for family and friends.
View Tribute Book
Darren Paul Rybka, Sr., 54, of Porter Corners, NY was taken to his eternal resting place on January 22, 2021 after losing his fight to Covid-19. He is predeceased by his brother and best friend, John M. Rybka, Jr., who was also granted eternal rest on January 4, 2021. Darren was born in Hudson, NY, to John Sr. and Pamela (Davis) Rybka on February 4, 1966. He graduated from Ichabod Crane in 1984, where he was a four-sport athlete and immediately enlisted in the United States Army where he served until 1987, doing a tour of duty in Korea. He currently worked as a Senior Project Manager with Creative Sports Concepts. Darren, along with his two sons and their love for horses, partnered in owning, training, and racing harness horses. Darren was a loving father to two sons, Darren Jr. and Steven, both of Saratoga, NY, survived by his parents, John and Pamela Rybka of Kinderhook, NY, a sister, Michelle Pullen (Michael) of Palmetto, FL, and his significant other of nine years, Kelly Clark, of Porter Corners, NY. He is also survived by his nephew Jeremy (Solomia) Pullen, his nieces Alli (Mavist) Frederick and McKenzie Rybka, and his great nieces Milah and Paisley. Also surviving is his Godmother, Maryann Kovalich of Hudson, NY. Darren was predeceased by both his paternal and maternal grandparents, Michael and Claire Rybka and Maurice and Katharine Davis. There will be a celebration of life for both Darren and his brother, John in the future. Aeeargements are under the direction of the Raymond E. Bond Funeral Home, Valatie.
Online Memory & Photo Sharing Event
Online Event
About this Event

Look inside to read what others have shared
Family and friends are coming together online to create a special keepsake. Every memory left on the online obituary will be automatically included in this book.
View Tribute Book
Share Your Memory of
Darren
Upload Your Memory View All Memories
Be the first to upload a memory!
Share A Memory
Send Flowers